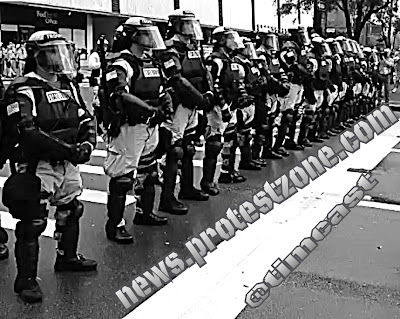 Start a conversation: Why are the protestzones empty? 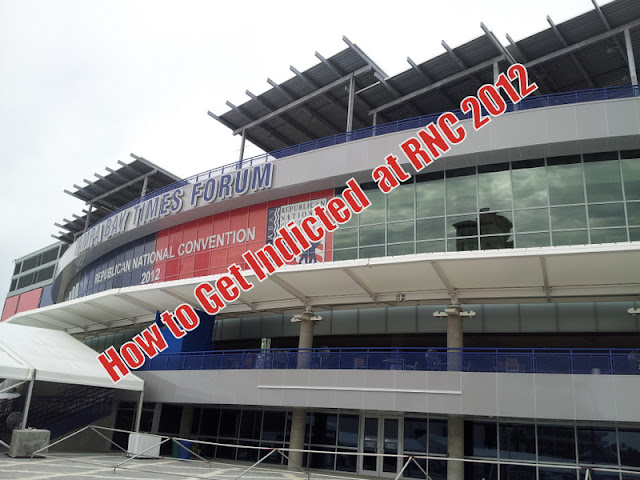 RNC Hurricane Party Video From Inside the Trop

Tampa Criminal Defense Attorney and Civil Rights Lawyer just found some video from inside the action at the RNC Hurricane Party in Florida. Meanwhile, action outside was wet. As Tropical Storm / Hurricane Isaac bore down on Tampa Bay and New Orleans,  the party went on as scheduled at Tropicana Field in St. Petersburg, Florida. Looks like a good time was has by all who received these exclusive invitations.

The video recaps the party and begins with interviews from delegates from across the country.

RNC Protest Arrest - How to Get Federally Indicted in Tampa

Tampa Criminal Defense Attorney has been researching how to get indicted in Tampa Florida during the Republican National Convention (RNC) in Tampa, Florida. How do you get indicted for protesting? Violate a little known law that became effective in March 2012, the Federal Restricted Buildings and Grounds Improvement Act of 2011. The Federal Restricted Buildings and Grounds Improvement Act of 2011, 18 U.S.C. § 1752 (2012), is essentially an anti-trespassing statute that covers locations subject to heightened Secret Service security measures. Special thanks to our confidential source for helping with the legal research. I have already discussed the new law with a couple of Assistant United States Attorneys in the Middle District of Florida - Tampa Division.


Violate the new Federal Trespassing Statute - What Type of Conduct is Prohibited by § 1752?

Knowingly entering or remaining in any “restricted building or grounds” without lawful authority to do so;

Knowingly, and with the intent to impede or disrupt the orderly conduct of Government business or official functions, obstructing or impeding ingress or egress to or from any restricted building or grounds;

Knowingly engaging in any act of physical violence against any person or property in any restricted building or grounds; or attempting or conspiring to do so.

Section 1752 applies at locations where individuals under Secret Service protection are temporarily located, and/or at a major event designated as a National Special Security Event. §§ 1752(c)(1)(A)–(C). Restricted buildings or grounds are any posted, cordoned off, or otherwise restricted area of a building or grounds so restricted in conjunction with an event designated as a special event of national significance. § 1752(c)(1)(C).2 This includes the Republican National Convention (RNC) held this year in Tampa, Florida.

What are the penalties for violating § 1752?

Under a willfully and knowingly” standard, you have to know your conduct is unlawful to violate the statute. See United States v. Bursey, 416 F.3d 301, 308 (4th Cir. 2005) (holding that to have acted willfully under § 1752, a defendant must have “acted with knowledge that his conduct was unlawful.”) (internal citations omitted). But a “knowing” standard merely requires that you “act knowingly” to commit a crime. Thus, a person will be guilty of a crime if that person “knows” he/she is in a restricted area, even though that person had no intention to break the law.

Second, § 1752 gives law enforcement broad authority to determine when otherwise lawful protest becomes criminal. For instance, § 1752(a)(2) prohibits “disorderly or disruptive conduct,” without bothering to define what exactly is “disorderly” or “disruptive.” The same is true for whether a protester is “within such proximity to” a “Government business or official functions.” Law enforcement will presumably decide whether a protester is too loud or too close for comfort.

What are the defenses available?

RNC Tampa Protest Arrest Attorney Lawyer just obtained the full text of a letter Letter From Sheriff David Gee, but we are posting a few excerpts below.

"Tactically, we are ready. Security plans for the venue and the perimeters are set. Boundaries, protests zones and parade routes are established for the thousands expected in downtown Tampa. This is a special time for local civic pride as Tampa Bay gets ready to shine. To the agitators and anarchists who want only to bring a dark cloud to this event, let me be clear: criminal activity and civil disturbances will not be tolerated and enforcement actions will be swift."

"There will be arrests. The question is how many. We are prepared to handle any number of RNC-related arrests through our Orient Road Jail. We are committed to due process and the rule of law regarding RNC-related arrests. We have procedures and policies in place to ensure an orderly and lawful process for anyone arrested. "

Full Text of the Letter:

The upcoming Republican National Convention will transform the Tampa Bay area on an international level. Like no other, this event will showcase the area's communities as well as the Herculean task to provide security for citizens, elegates, visitors and everyone in between. Federal, state and local law enforcement officers began planning for this event in June 2010. I am confident to tell the public that we are prepared to make it a successful RNC in Tampa. The challenges of preparing for and executing a security/safety plan for an event of this magnitude are daunting.

There are many pieces of the puzzle, most known but some unknown. For me, staffing is the critical piece to making it all work. While the RNC is taking center stage and mandates a heavy commitment of Sheriff's personnel, plenty of deputies will still be available to answer calls for service throughout the county. The RNC demands thousands of law enforcement officers to converge on downtown Tampa for a 24-hour-a-day presence. Some will be assigned special security details. Some will be responsible for getting the scores of buses and vehicles with delegates and VIPs to and from the Tampa Bay Times Forum. Some will be on the street. Some won't be seen but poised to respond quickly and appropriately to a security situation. All of these law enforcement officers - some deputies, some police, some state troopers, some federal and state agents - will have to perform as a unified, cohesive unit.

These law enforcement officers from dozens of sheriff's offices and police departments across the state must execute a uniform philosophy of crowd management and security. Blending all of the personnel has been a months-long strategy of training, scheduling and equipping. Tactically, we are ready. Security plans for the venue and the perimeters are set. Boundaries, protests zones and parade routes are established for the thousands expected in downtown Tampa. This is a special time for local civic pride as Tampa Bay gets ready to shine. To the agitators and anarchists who want only to bring a dark cloud to this event, let me be clear: criminal activity and civil disturbances will not be tolerated and enforcement actions will be swift. We are prepared for a peaceful and purposeful RNC.

Part of our security planning process included discussions with law enforcement officials in Minneapolis- St. Paul about the mistakes and successes when that area hosted the RNC in 2008. Lessons learned were lessons included in our months of discussions about security. The most visible aspect our security plan will be the boots on the ground - the law enforcement officers on the street, manning perimeter posts and designated protective locations. Their khaki-colored uniforms, clearly marked with "SHERIFF'' or "POLICE'' are designed to provide the appearance of a fine-tuned machine. And it is. There will be a consistency in garb, response and reaction by all of the law enforcement officers.

Our LEO's will get plenty of water - each with Camelback hydration packs as part of their uniforms. Throughout the city there will be specially assigned locations for security personnel to replenish and refresh. Keeping our law enforcement officers cool and collected is paramount to everyone's safety. There will be arrests. The question is how many. We are prepared to handle any number of RNC-related arrests through our Orient Road Jail. We are committed to due process and the rule of law regarding RNC-related arrests. We have procedures and policies in place to ensure an orderly and lawful process for anyone arrested. The Hillsborough County Sheriff's Office is excited to be teaming with the Tampa Police Department in our shared responsibility for RNC security. Our security plan would not be possible without the cooperation and dedication of other sheriffs and police chiefs around the state. For one week in August, there will be thousands of law enforcement officers in Tampa with a laser focus: provide a safe and secure RNC. Source:

In the 3 minute film we see the special badges issued for the Republican National Convention and recieve information about how they will handle the protesters and respect some of their First Amendment Rights. Welcome everyone to Tampa for the 2012 RNC Convention.